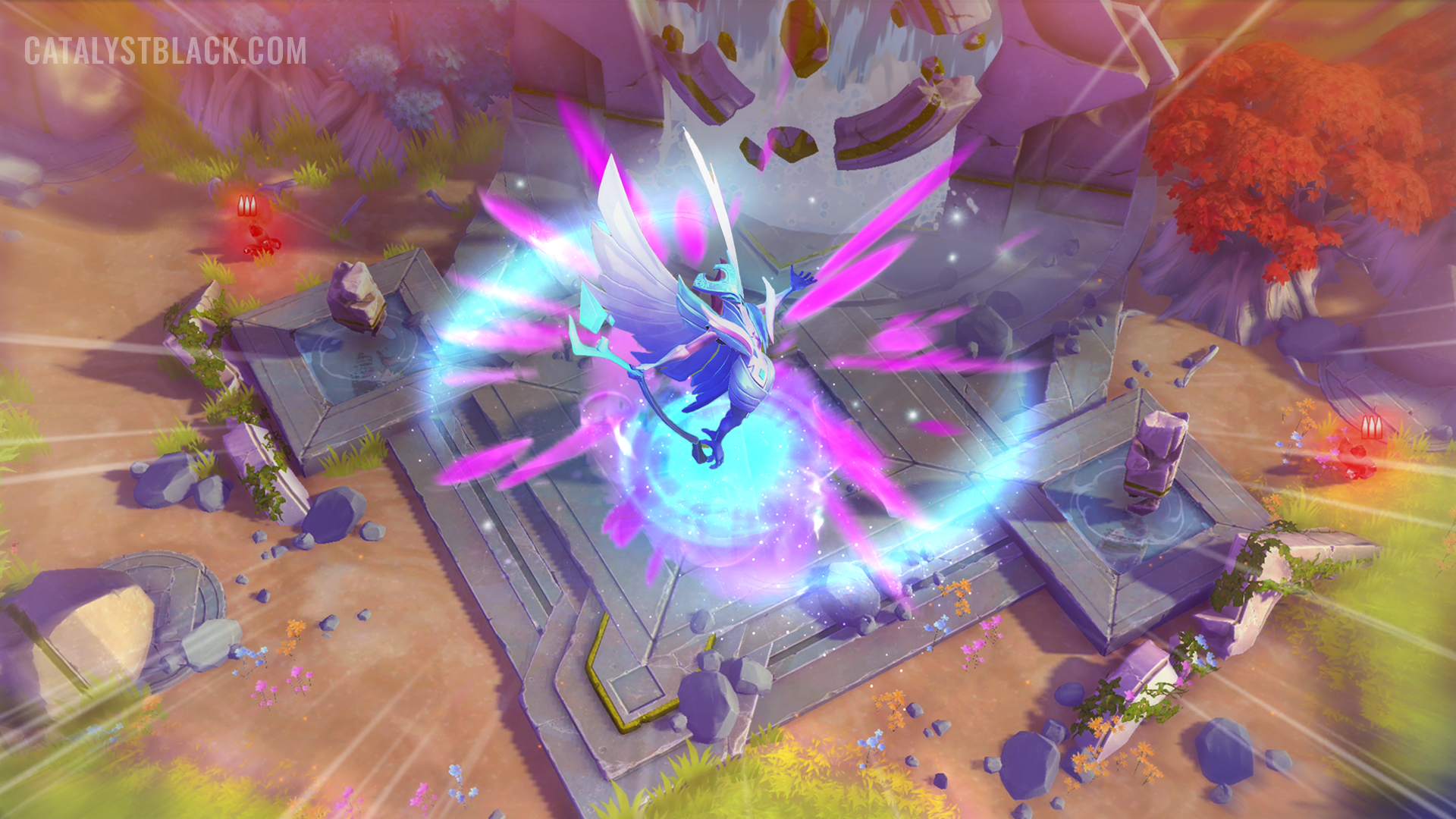 The balance update is here! As we continue to push forward toward worldwide launch, we want to ensure that our base combat is in its best form. Movement speed is up and health is down, making battles both more common and fast-paced. Weapons and primals are also seeing massive changes across the board to provide the widest range of viable loadout options possible.

On the progression side, we’ve taken your feedback into account and tuned the costs of chests as well as infusions. We appreciate your quick testing and will continue iterating on the system as needed. Additionally, the new Might stat in the loadout screen provides a glimpse into the strength of your equipped gear.

In just a few months, Catalyst Black will be available for everyone — and you will have the unique opportunity to look back and say you shaped the game. Find us on Discord to share your thoughts on the balance changes and other 0.18 content!

Keeping up with group action proved difficult for players, especially in modes with larger team sizes. Allowing for multiple convergence points around the map is important for Catalyst Black’s gameplay, and providing quicker access is core to facilitating that identity. Together, these changes increase the overall speed of the game; not only in the time it takes to travel across the map but also in how fast combat resolves.

Following the loadout progression overhaul in Patch 0.17, we heard from the community that some aspects didn’t match up to player expectations. Specifically, the more frequent pain points were surrounding the value of chests and infusions. Based on this feedback, we’re making three notable changes to the system.

As the progression methods are expanded upon, both visually and functionally in the coming updates, we want to make sure all aspects are clear and rewarding. Let us know if these changes stay true to that goal!

DEV NOTE: Over the past few weeks, we’ve examined the primal meta closely in response to the unlimited duration change made in Patch 0.17. Sunder and Issia will be seeing a cooldown time increase because of their frequent availability and effective combat. Sunder has been dominating the new Hydra mode with a Primal Roar build, proving too effective at rushing down the Overseer without much counterplay opportunity.

Torden is doing great, but the usage of his support tools is very low, necessitating substantial increases to his power in order to encourage players to experiment with a more supportive playstyle.

Jainx is performing mostly OK but can be oppressive when combining his Dread Relic with Corral against larger groups of enemies. On the other hand, Savage Charge is proving lackluster and is subsequently receiving an increase to its base damage and a slight reduction to its cooldown to be more forgiving when used ineffectively.

Nock has had a bumpy time, coming out of the gate weak but ramping in win rate in recent days. As a result, she is receiving only a few minor buffs, particularly to her basic attack cooldown to restore some of her previous mobility. 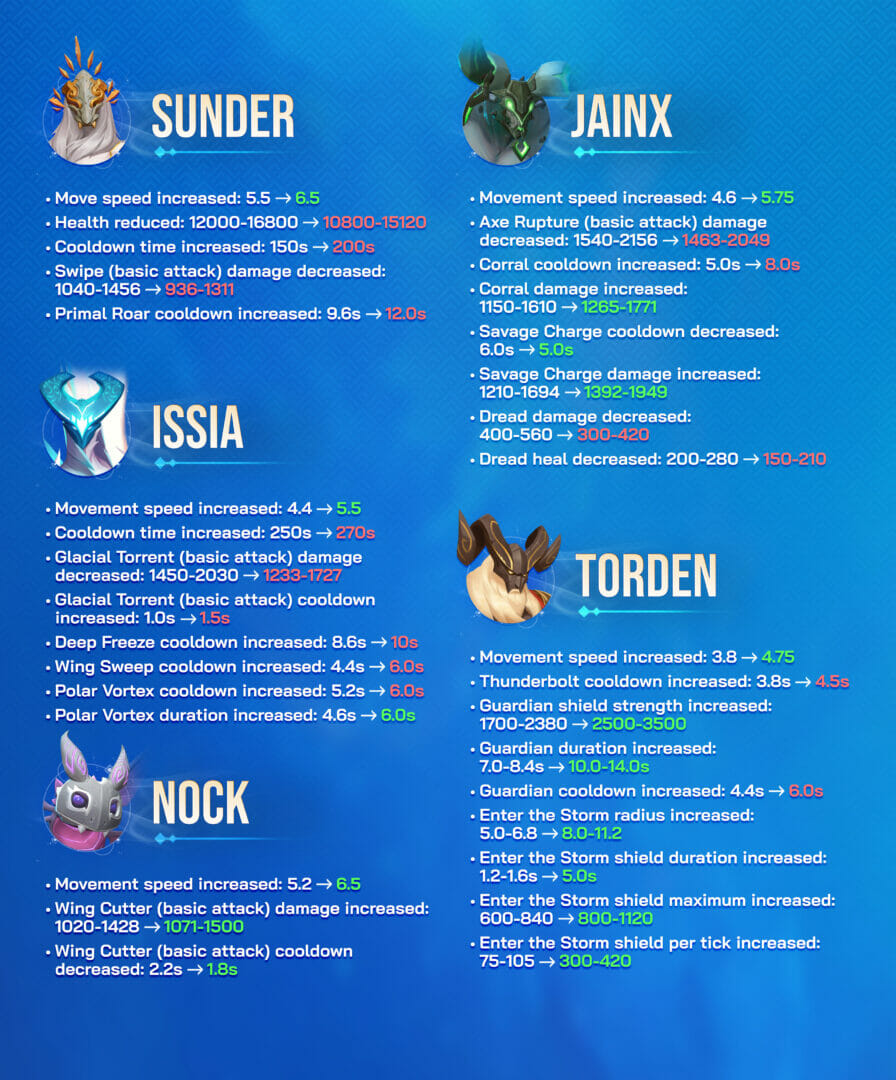 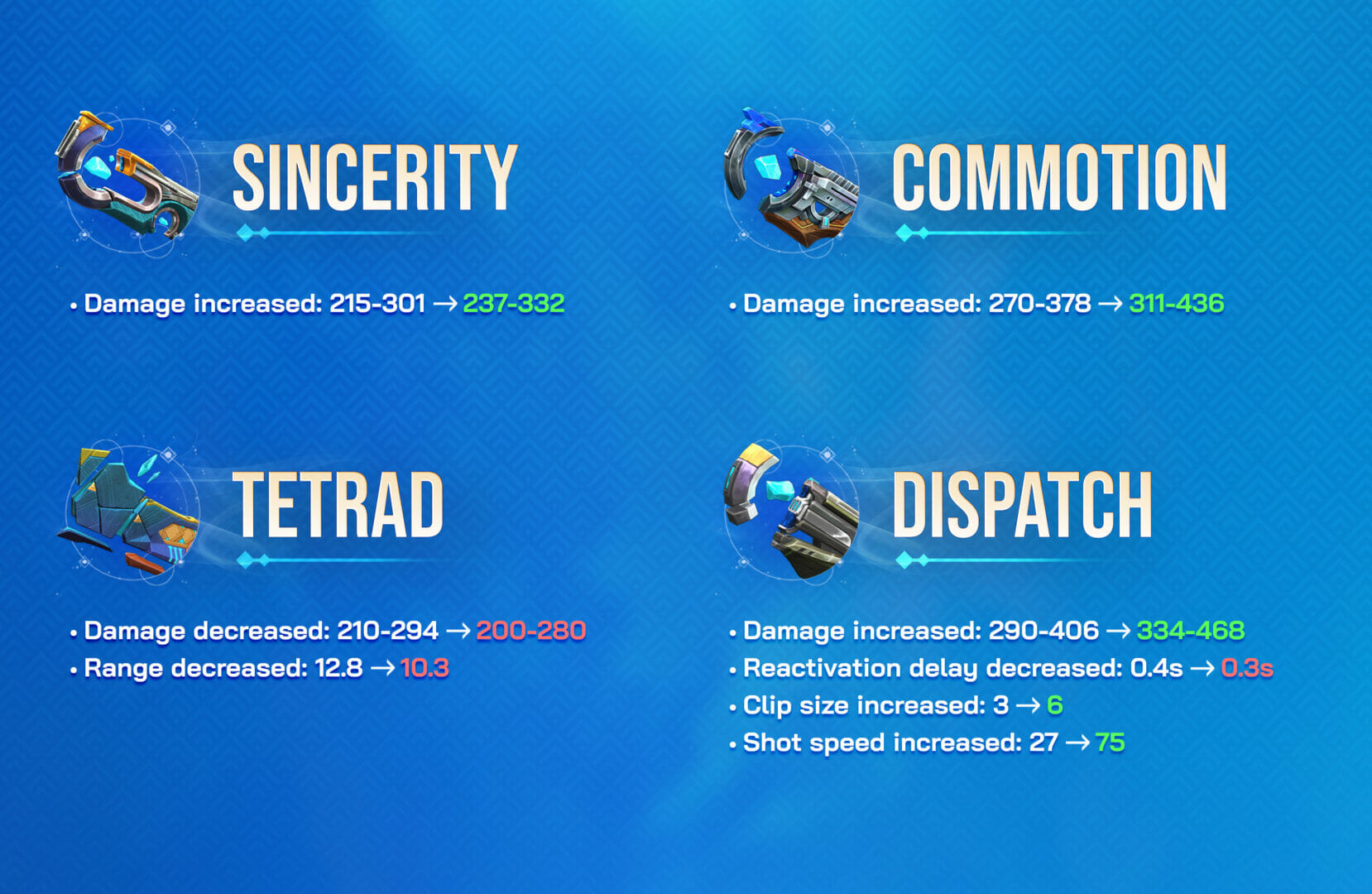 Sincerity and Commotion were slightly underperforming, so a slight damage buff is in order for these weapons to make them more competitive. Tetrad was actually shooting farther than was intended and has been brought back in line with its fellow Battle Rifles. It was also putting out more DPS than other primary Battle Rifles due to its 4-shot volleys, necessitating the small damage reduction. Dispatch has been consistently performing poorly, so several buffs have been applied to hopefully make it a more desirable heavy weapon option. The shot speed has also been dramatically increased to align it with other Assault and Battle Rifles. 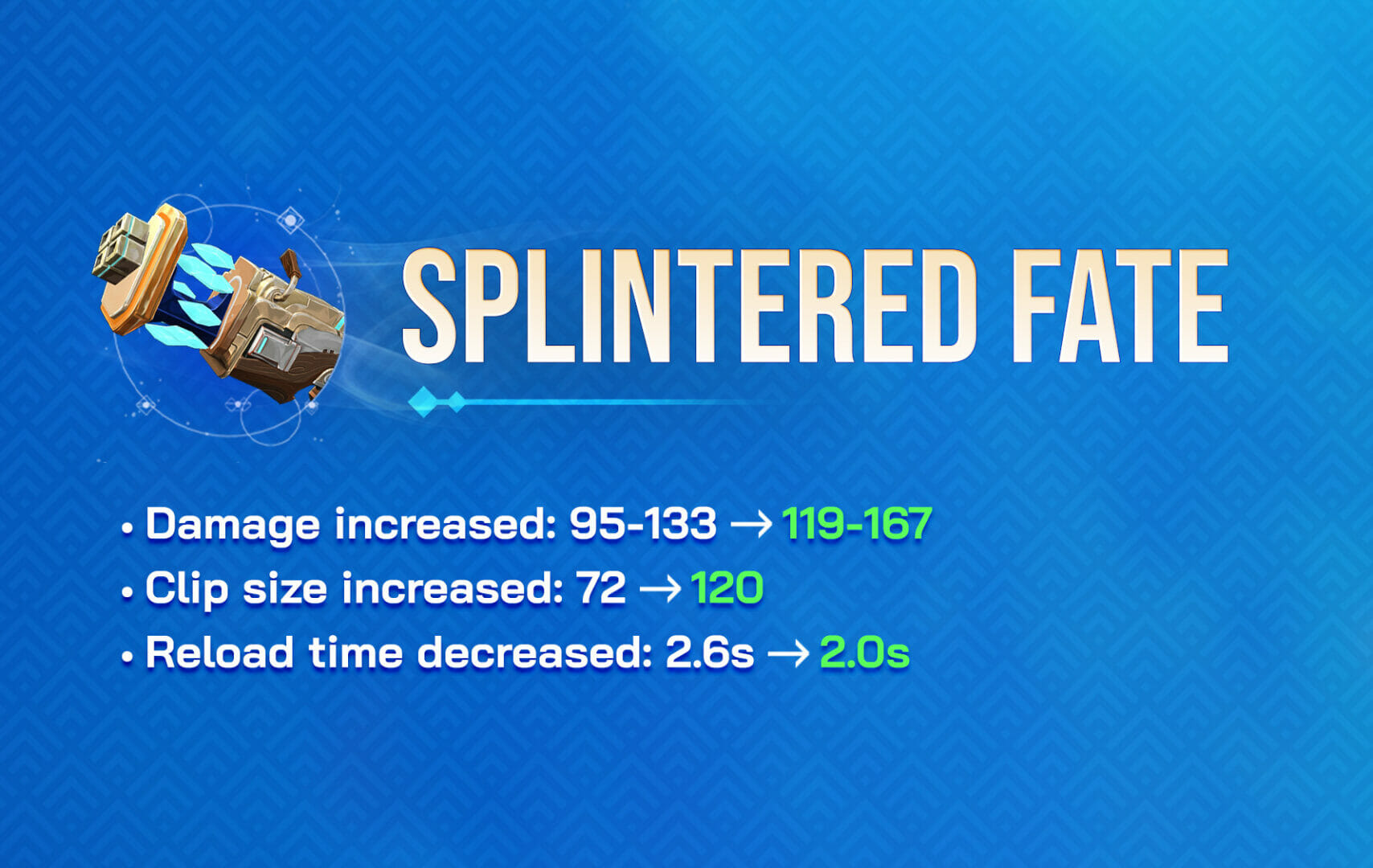 Splintered Fate is not providing anywhere close to the output we expect from it, so it’s receiving some pretty large buffs to make it an attractive weapon choice for more experienced players again as well as more reliable for newer players the way Northern Warmth has been. 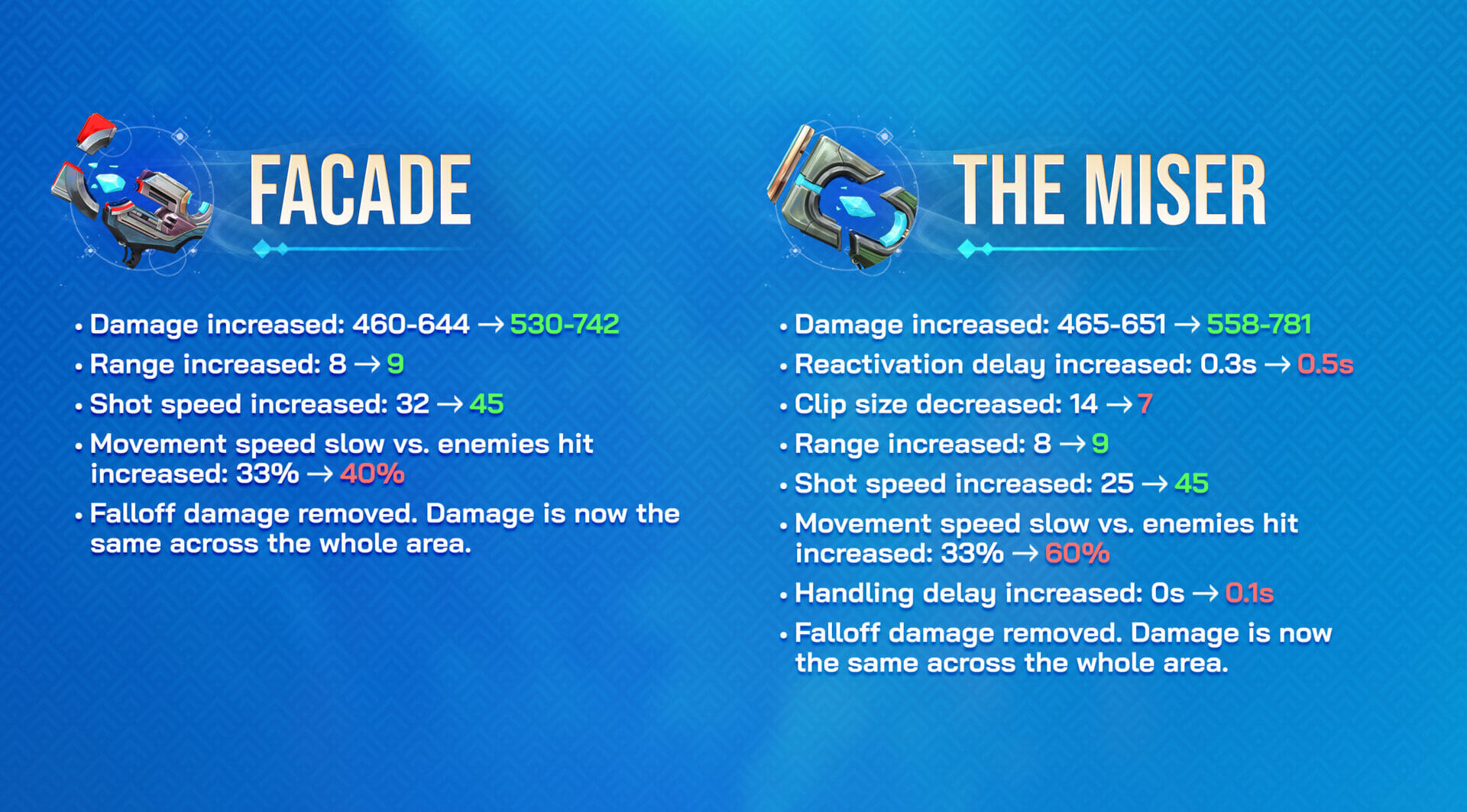 Flaks have been struggling to keep up with other weapons for a while now despite being buffed repeatedly. This time around, they are receiving some fairly extensive buffs. First, their damage falloff is being removed. This will help distinguish their damage spread from Mortars and Rocket Launchers. Next, the baseline slow that they apply to enemies is being increased, especially for Miser — one of the least used and weakest Heavy Weapons at the moment. As the slow amount has been so heavily increased for the Miser, the clip size has been reduced to compensate. 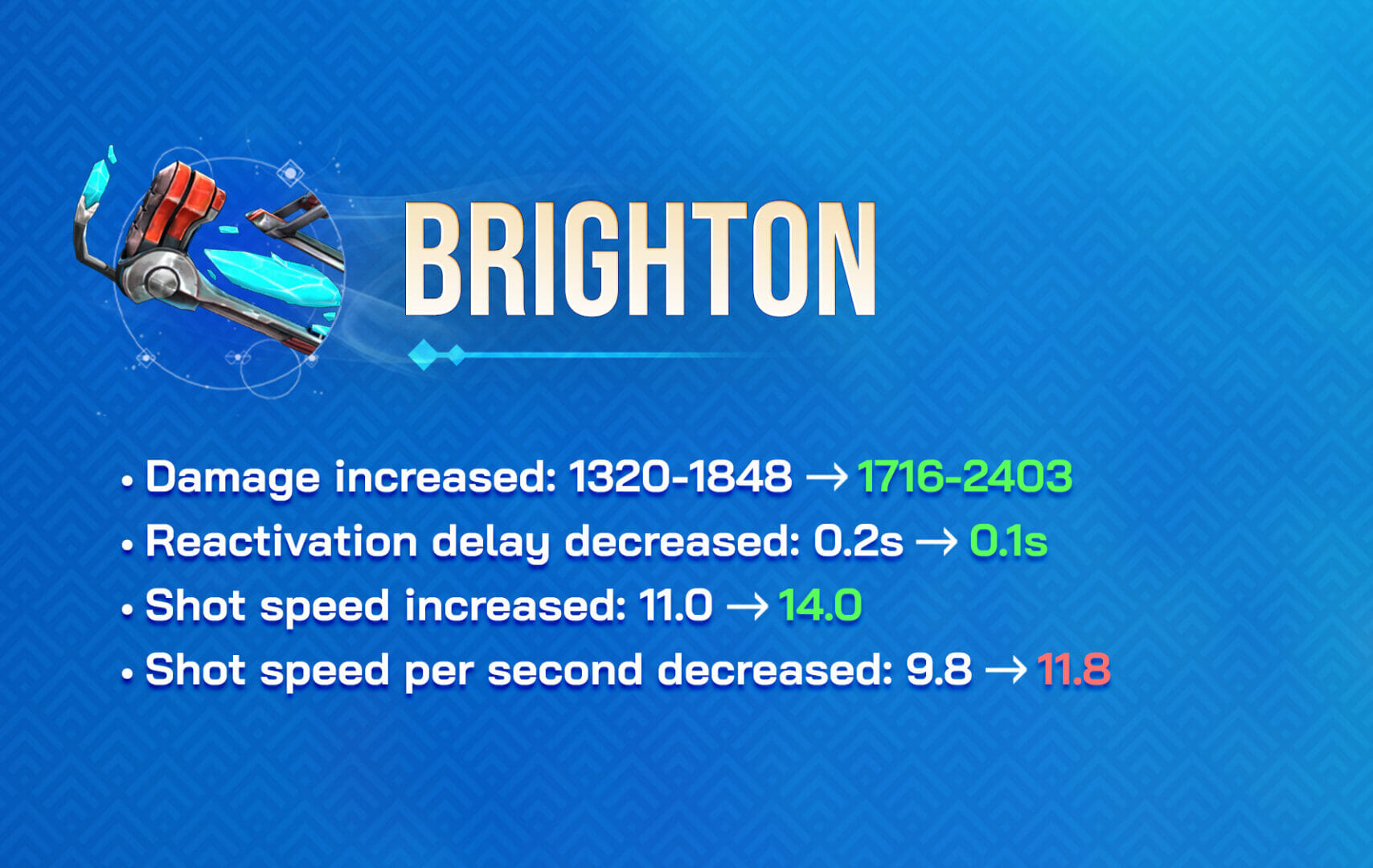 Ol’ Brighton has been on the struggle bus lately. Hopefully this damage increase will bring it back to form, and the shot speed increase should make it easier to apply damage to enemies who enter your range. Overall, Brighton should feel much better to use! 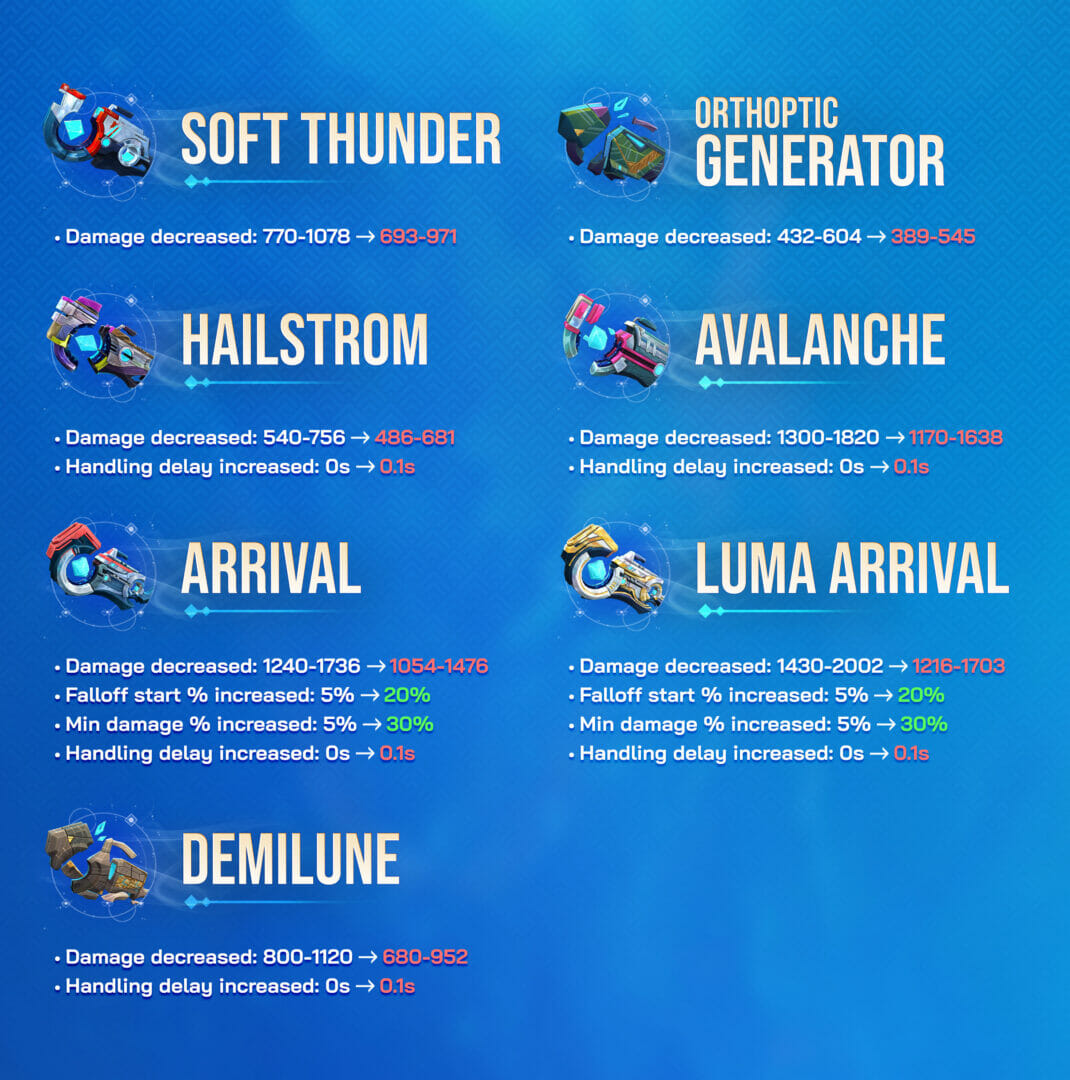 All Mortars are performing quite a bit better than other weapons at the moment, so they’re all receiving a minor damage reduction to keep them in line. Arrival and Luma Arrival are receiving a pretty hefty buff to their falloff damage to make them more forgiving when grazing enemies since their time to impact is much longer than other Mortars.

Both pistols are putting out a little too much burst damage, but their damage per shot is feeling pretty good. Just ever so slightly decreasing their attack speed so their DPS remains closely aligned with other weapon types. 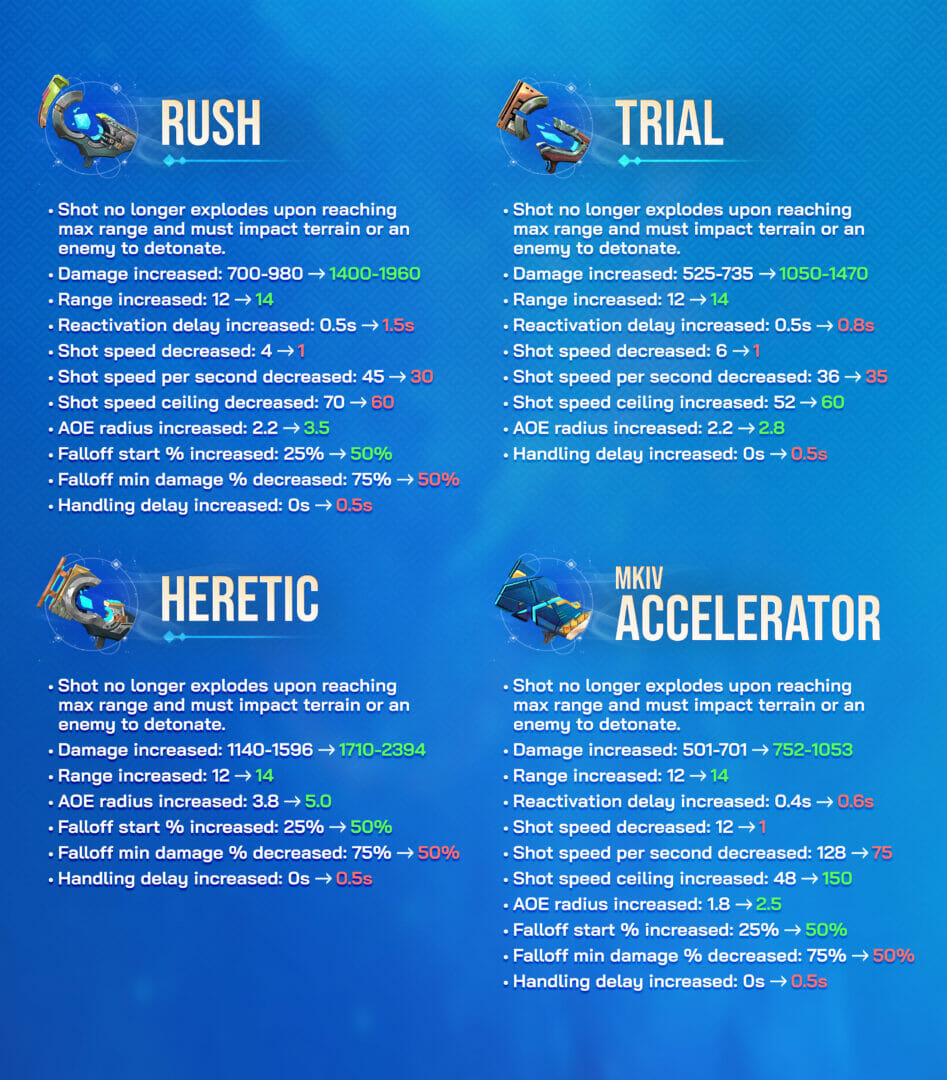 Rocket Launchers have undergone a significant rework. No longer will they explode automatically at the end of their path but will instead only explode upon impacting terrain (such as a wall or an obstacle) or an enemy target. Alongside this change comes a large damage boost as well as a range and explosion radius increase. This should make them much more powerful against clustered targets or enemies in narrow areas but prevents them from being used as an area denial weapon, which Flak are now much better at. The reactivation delay of many Rocket Launchers has been increased to prevent their use as instant point-blank burst damage weapons. 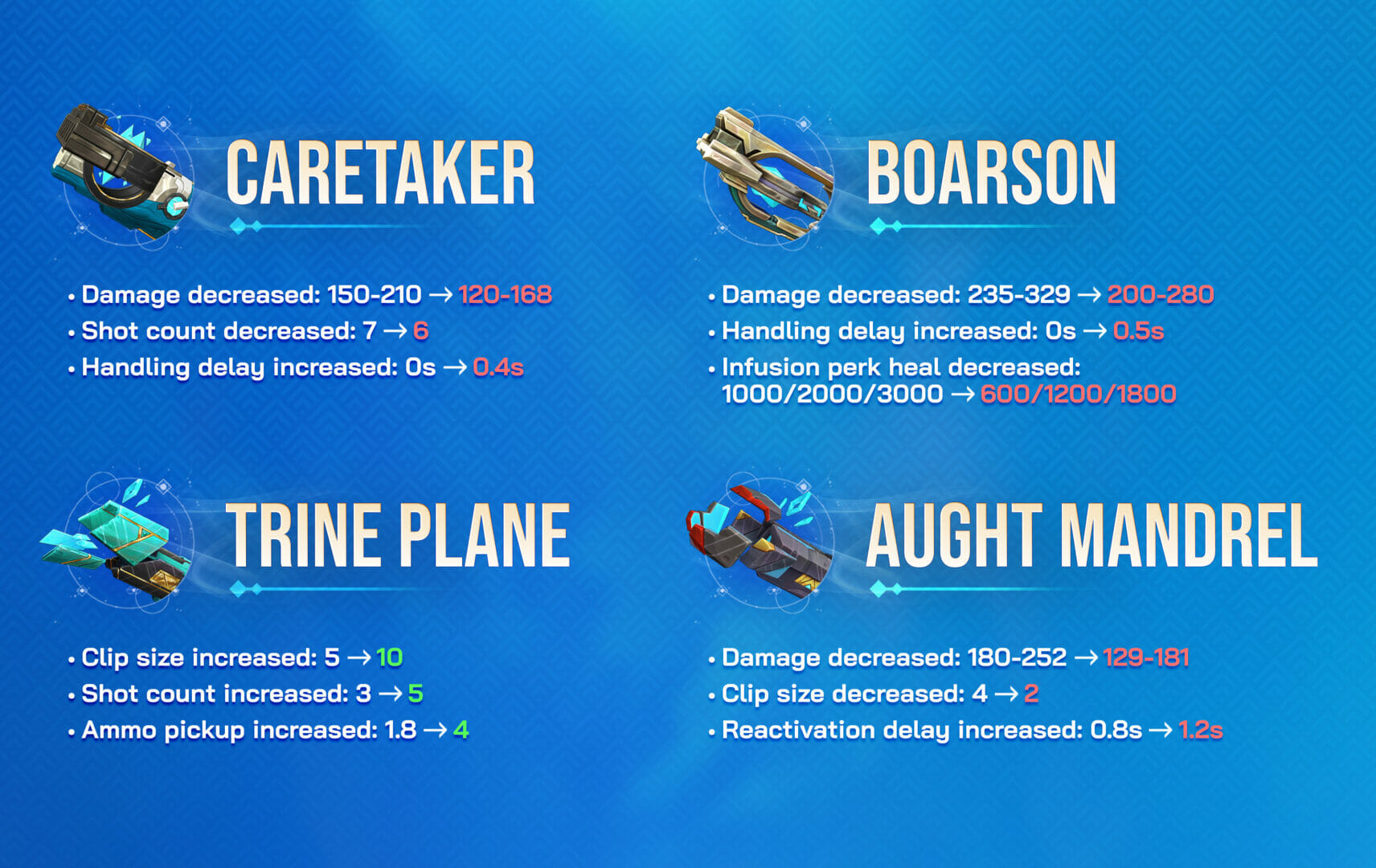 Shotguns have risen to the top of the food chain in recent patches and are putting out a sizable amount of damage too quickly. While we want Shotguns to be the premier close-range weapon, they are able to take down targets a bit too quickly relative to other weapons, so we’re dropping their damage down. Caretaker and Aught Mandrel are particularly heavy offenders here. Trine Plane, on the other hand, is in need of some serious help, so it has received an increase to its shot count to help achieve its infusion perks more quickly as well as a larger clip size and increased ammo pickup to help keep the bonus rolling for longer periods of time. Its damage has also increased as a result of the shot count increasing from 3 to 5. 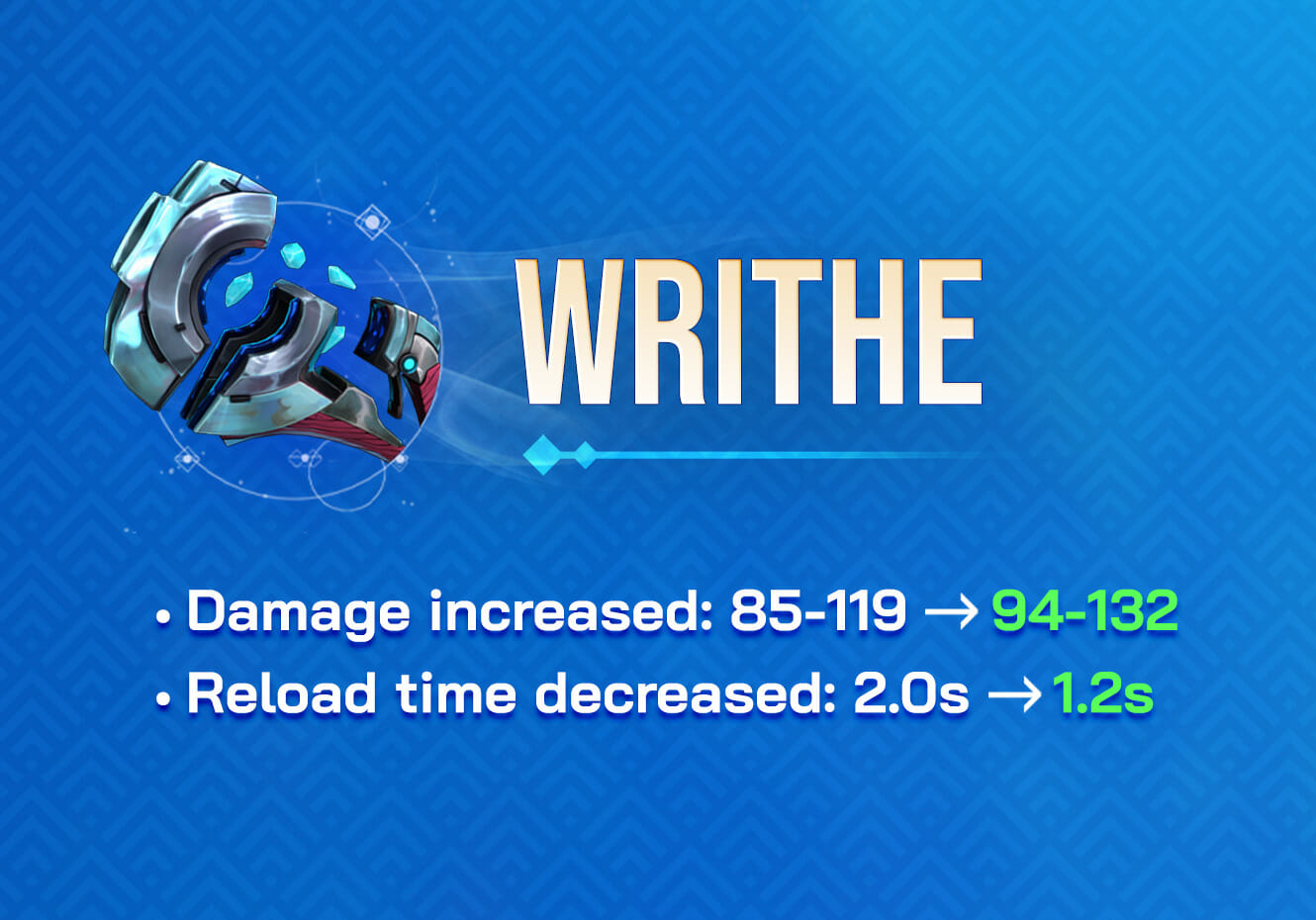 We’re happy to see Writhe being adopted by more players, but it could still use an increase in damage to help. The reload time is also long for a close-range high-DPS weapon, so we’re cutting it down quite a bit which should help with longer engagements. 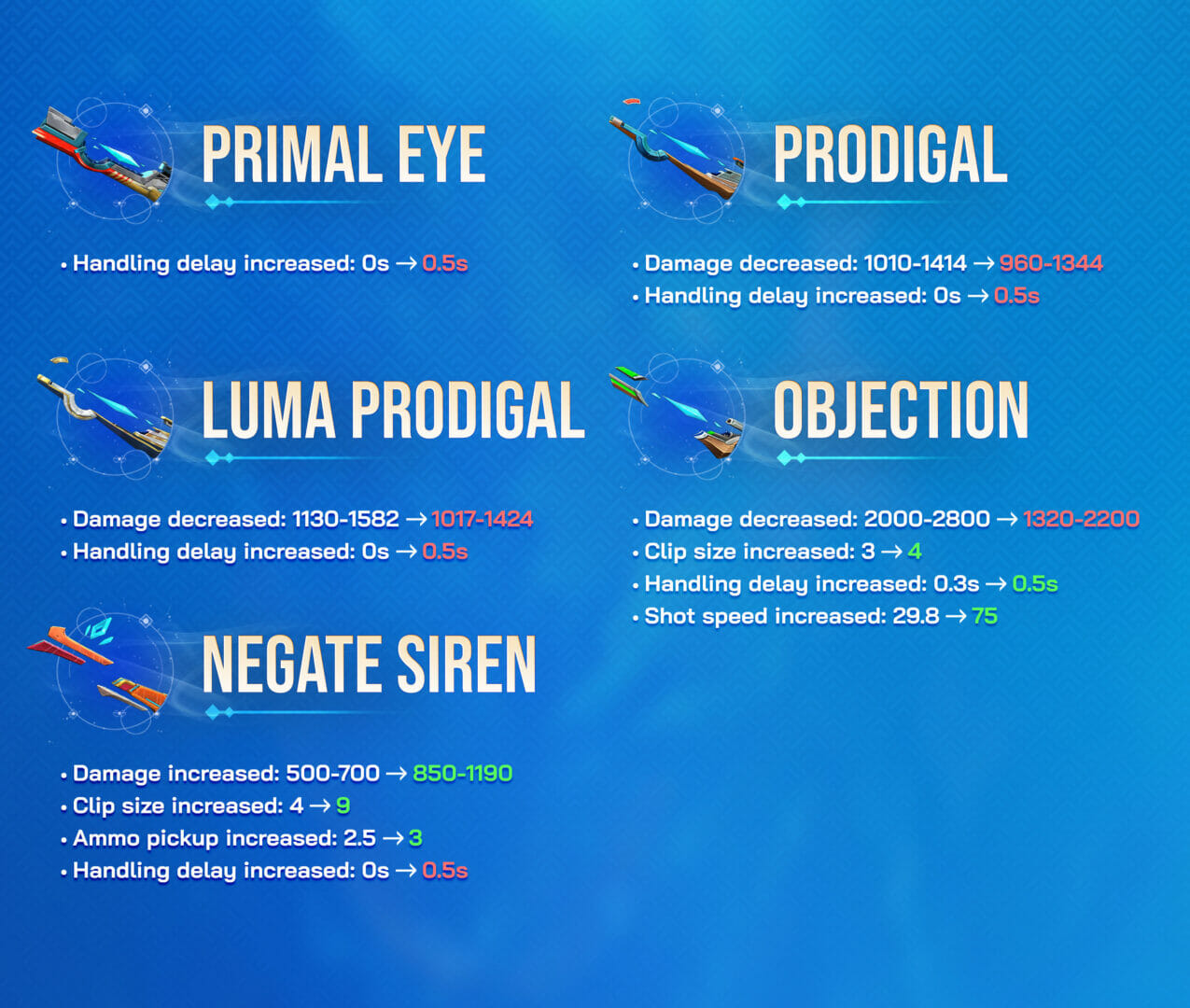 We’re planning to do a larger overhaul of Sniper Rifles in a future release, but for now, we’re just tweaking some numbers to keep them competitive with other weapons. Luma Prodigal and Objection are particularly egregious here, boasting a very high win rate at the moment. All Sniper Rifles have also had a handling delay added, which prevents them from being fired alongside other weapons at the same time. This effect was greatly contributing to their power in a greater way than intended. Finally, Negate Siren is performing rather poorly, so it’s receiving a healthy round of buffs to bring it up with the other heavy Sniper Rifle options. 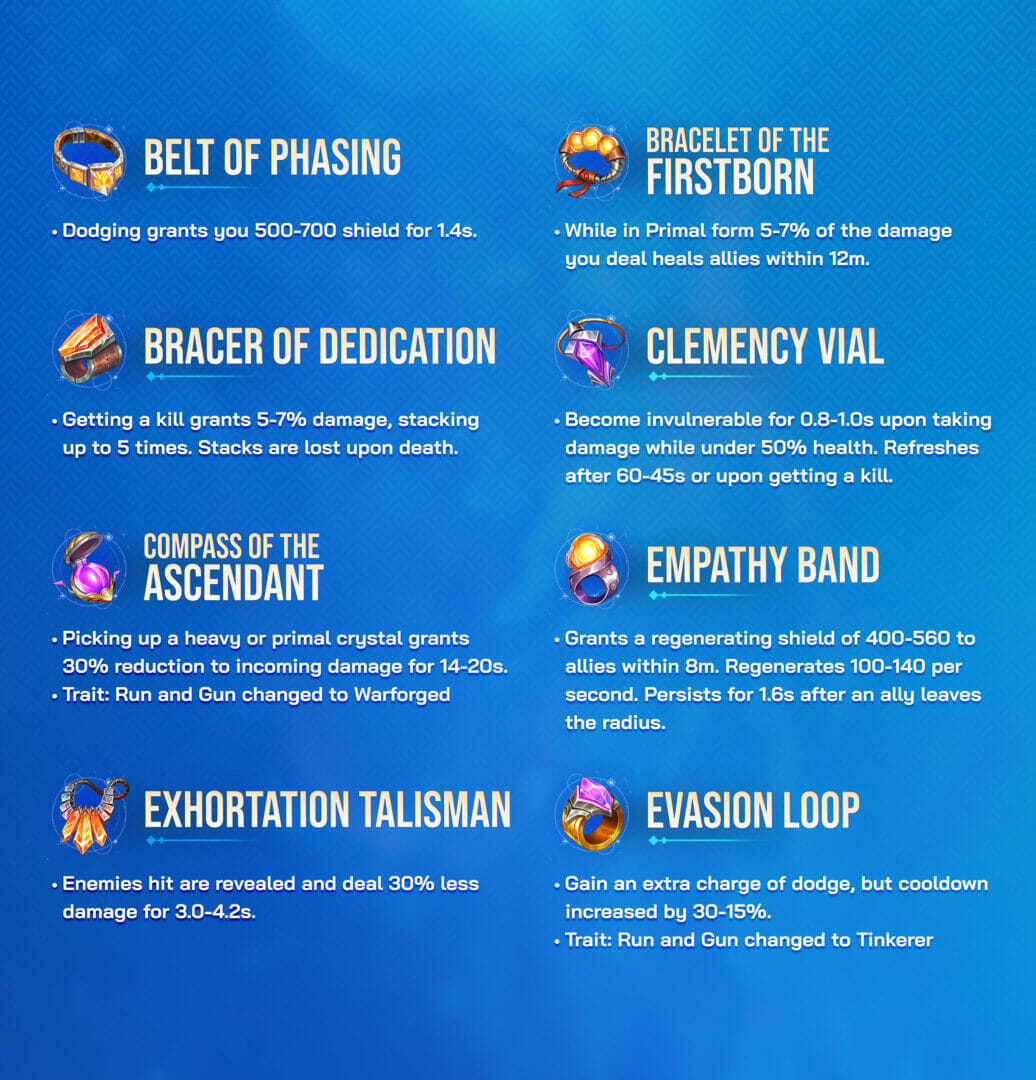 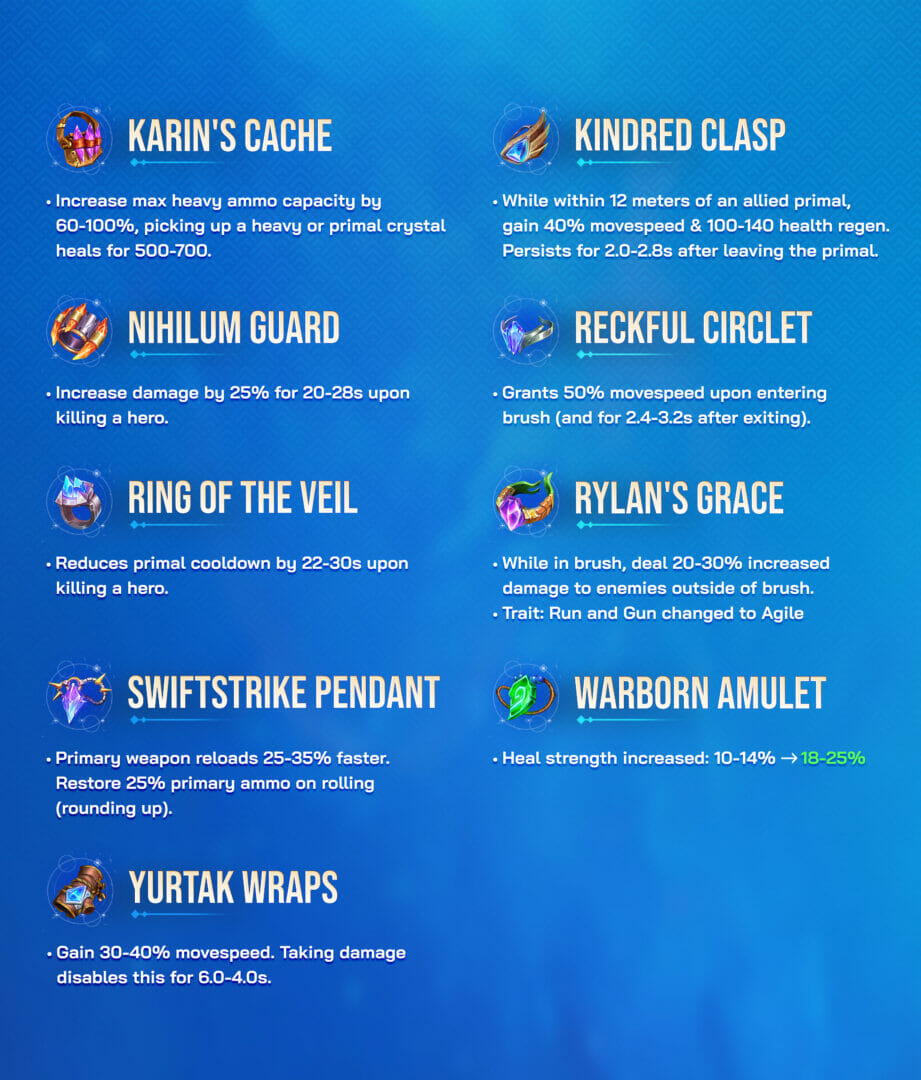