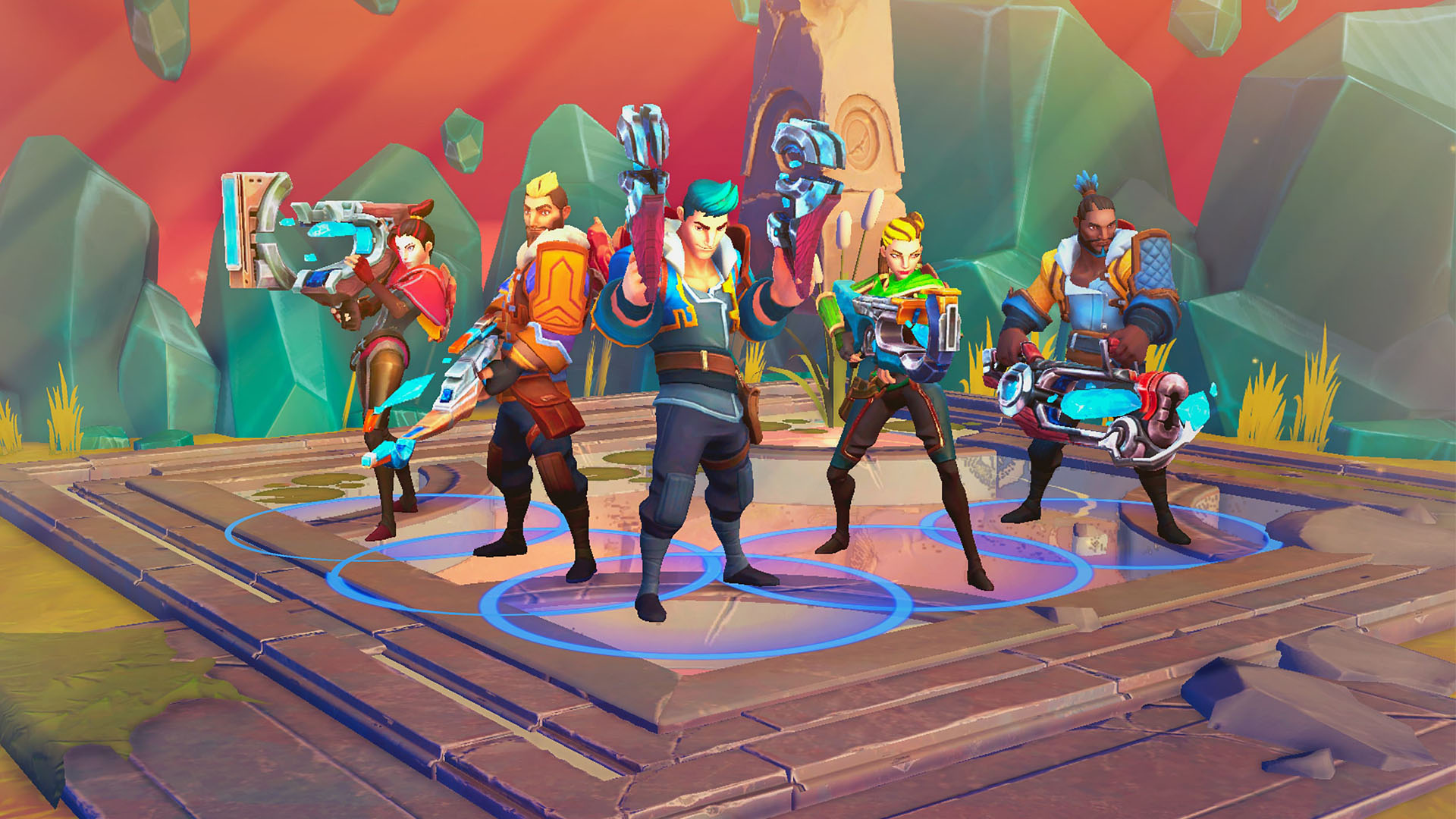 0.20 Patch Notes: This is Catalyst Black

Two years of active beta development have led us to this moment: The launch patch! In preparation for the big day, Patch 0.20 focuses on general improvements to ensure the smoothest game both inside and outside of the battlegrounds — but there are some surprises in store.

At your request, parties can now host 5 players! New quests are also introduced and gear is significantly cheaper to purchase. We threw a massive “Thank You” bundle in the shop for your support during beta as well. You don’t wanna miss it.

Looking ahead, every new player that downloads Catalyst Black brings richer combat and social experiences. Launching Catalyst Black means we can begin designing new primals, weapons, modes, and other exciting features that will keep gameplay fresh. For now, this is the game you helped shape — and it’s time to share that with the world on May 25th! Join our Discord to connect with the community.

Over the past two years, we’ve been blessed to have your support. The beta began just beyond the prototype stage and since then has transformed with all-new modes, revamped combat feel, and rewarding progression systems.

A game cannot thrive without an active community, and you have all given a sense of purpose to our development. To show our appreciation for your consistent feedback as well as compensation for vaulting certain Abilities, a “Thank You” bundle is available in the Shop until launch containing:

Parties have been increased to 5 players! Rejoice and fill up a whole team together. As the number of active players skyrockets with global launch, bigger parties will facilitate the sense of deep teamplay that the game was built on.

Across the game, improvements to various UI elements are in. Most notably, the Play Menu has been simplified to make getting into matches more direct — including collapsing the rotating modes into one node.

In Hydra, the map has received art polish to stay on par with the other environments. Or look better than the rest. You tell us. The refined goal count and activity tracker also add clarity to the mode’s objective paths.

In speaking with the community, we heard that the price of gear was too expensive and Quint was taking too long to collect. These changes transform Quint into a more dedicated currency, only being earned from chests and existing to help you with infusing the items you love most instead of for finding new gear.

Additionally, the drop probabilities for chests should now give new players a smoother flow of collecting gear. Early players can focus more on infusions and leveling their gear, while veteran players will find it easier to get the last pieces of unowned epic and rare gear, with legendary gear still being hard to come by. If there’s an item you’re after, wait for it to become Starlit!

Throughout the beta, we have greatly enjoyed seeing the wide range of loadouts and playstyles that have evolved over time. While Primary & Heavy Weapons and Trinkets saw deep experimentation, Abilities have always been an area of stagnation. Some Abilities were used extremely frequently, such as Temporal Rush and Primal Fire, while others, including Windwalker Totem and Grounding Bolt, had nearly no play time.

In addition to usage problems, there are some important design decisions that we’ve recently made around many Abilities. The first is that, in general, we don’t like the way “selfish” support Abilities are working out. This includes Abilities such as Heal, Renewal, and Protection. We would prefer to see these executed in a more support-oriented loadout and playstyle to get players working together rather than the lone wolf tactic that they currently encourage.

The second is that with the base movement speed increase we recently added, we want to be more conscious of the methods that players can gain and use from movement speed buffs. Sprint, Catalytic Sprint, and Windwalker Totem merely increase your movement speed, and while this can be fun, it can also be difficult to balance in a way that feels fair to play against and worthwhile over higher output options. With the changes we’ve made to base movement speed, we do not feel that these mobility options are engaging any longer, especially when compared to Abilities such as Leap Attack, Blink Strike, and Temporal Rush.

Lastly, invulnerability is a mechanic we believe should be used very specifically and sparingly. With Patch 0.18 recently overhauling Trinkets, we saw gravitation toward Clemency Vial combined with Protection which can create a frustrating gameplay situation for opponents. Protection also happens to fall under the “selfish” support Ability playstyle that we want to see less of. While it’s fun to be invulnerable and attack with impunity for a while, it is something that tends to create a lot of negative feelings when playing against. With the way it is currently, Protection can be very difficult to play around when compared to an Ability like Clemency Vial, where you are able to auto-activate the perk at a certain health threshold.

We appreciate that many of you will have invested into some or all of the vaulted Abilities, and in order to compensate for this, we doubled the size of our originally-intended “Thank You” bundle to try and offset some of this loss while still showing how much we value your support. We truly believe that the game will be better for having these abilities vaulted!

DEV NOTE: Issia is standing out as the strongest primal around, and her range combined with her fearsome damage is to blame. Polar Vortex has great uptime which is fun to play with and against but is too punishing when cast directly on top of enemies. Deep Freeze is poised as a defensive tool though leaves no time for enemies to react against it, as it typically kills non-primal enemies nearly instantly — so it is receiving a hefty damage reduction as well. With that said, all other primals are currently sitting in a happy place.

DEV NOTE: Lost Dreamer is struggling compared to Northern Warmth, so it’s receiving some extra power, specifically in the form of the amount of primal charge it grants on hit. Combined with the infusion and large clip size, this should prove to be a very effective combination.

DEV NOTE: Tetrad continues to be far too strong for its own good mostly due to the infusion perks. While the gameplay of dealing more damage to lower health enemies is fun, it’s a bit too powerful at the moment.

DEV NOTE: Facade is performing much better than expected, and it’s great to see more players experimenting with Flak. For now, Facade is receiving a reduction in effectiveness; however, Miser is sitting in a good place for now, so we’ll be holding off on any tweaks for it to see how the Facade changes play out. Anticipate a lot of Facade + Miser loadout combinations!

DEV NOTE: The Patch 0.19 Sniper changes have been playing out nicely, but Primal Eye and Prodigal are both lagging behind Luma Prodigal and Objection, so they are receiving some buffs. Primal Eye is receiving a large buff to its primal charge on hit to play into the theme of charging your primal extremely quickly. Other Snipers are also receiving a small buff to this stat to account for the charge-up time.

DEV NOTE: The Ranger Banner is providing far more movement speed than we’d like to see, so its Banner synergies are being reduced.

DEV NOTE: A few trinkets are underutilized at the moment, so they’re receiving some extra power to hopefully make them more of an attractive option. Clemency Vial is standing out as one of the strongest trinkets and is receiving a small nerf to its trigger amount to provide enemies with more opportunities to play around it.

Bracelet of the Firstborn