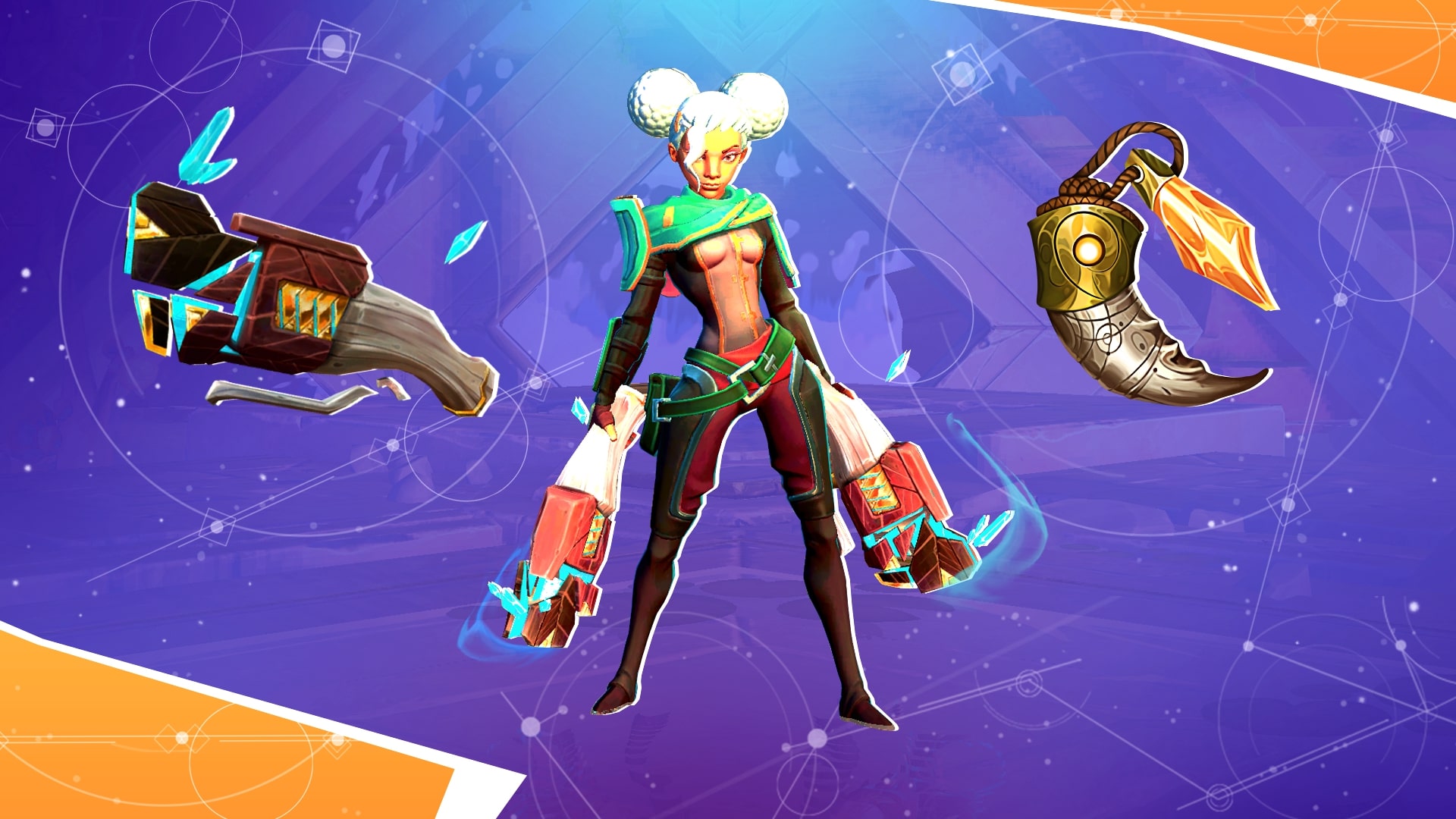 Picture this: You’re storming the central fortress in Eventide, dodge by the enemy Sunder, and start unloading your Heavy Weapon on a team of players. In one clip, you take all of them out. PENTAKILL. Impossible, you say? Meet the new gear in Patch 0.22.

Impact Conjugate (Heavy Weapon) fires hard-hitting rounds at close-range, and once infused, inflicts wounds on targets that cause them to take increased damage. Conversely, Windwraith Talon (Trinket) grants you bonus damage upon dodging near an enemy. You’re looking at a massive damage boost. Both are available for free through campaign quests or for immediate purchase in the shop!

The number of available modes has also been cut down to fill your matches with more real players. Pistols now reduce your dodge cooldown, new shop offers, simplified quest options… A fresh batch of improvements inside and outside of the game. Share your thoughts on our Discord!

Impact Conjugate is a rare Pistol class Heavy Weapon that fires hard-hitting rounds at close-range with a small clip size. With the new Pistol change where damaging enemies reduces the cooldown of your dodge combined with its Protector banner, Impact Conjugate also brings high mobility and health. Once infused, its bullets can cause progressively devastating wounds to the target, temporarily increasing the damage they take. Attack targets with your team to utilize this mechanic to its fullest extent. Find it in the new campaign quests and special shop offers!

A LEGENDARY ARRIVAL! Upon dodging near an enemy hero or primal, Windwraith Talon grants temporarily increased damage. On the Ranger banner path, the new Trinket unlocks a highly aggressive, assassin-like playstyle. Infusions grant a wide array of bonuses for your Ability, including gaining primal energy on activation. Find it in the new campaign quests and special shop offers!

Catalyst Black’s core combat system is accentuated by fighting real players: collective team brawls, enhanced reaction times, and 200 IQ Overseer backdoors. In the months since launch, we’ve heard feedback from you that your matches are often filled with bots. This can make for a game that feels singleplayer and ultimately dominated by the few humans around the map.

As a trial to funnel the player base into the same matches, we’ve narrowed down the available modes to Hydra, Eventide, and Slayer; thus, removing Colosseum, Capture the Flag, Core Rush, and Flag Hunters. We know many players have an affinity for these modes, especially veterans who saw Catalyst Black built on these very names from the start. This is initially being run as a test to ideally reduce the number of bots — and ultimately improve your player experience. We’ll be relying on your feedback to make final decisions around our available modes!

We wanted all players to have an equal opportunity to unlock the fresh gear for free, so we’re introducing new campaign quests to do just that! The first two are intentionally easy to complete, while the last quest is more challenging and will help unlock the initial infusion perk:

In other quest news, we’ve adjusted a number of existing quests as well as updated some rewards:

If you’re itching to unlock the new gear right away, don’t worry. There’s an Impact Windwraith pack in the shop that will spot you on both pieces of gear! The design team also put together a few of their favorite builds in new bundles, such as Denial by Fire and Team Hero — as well as discounts on Temporal Rush and Blink Strike. Get ‘em while they’re hot!

Pistols are receiving a unique identity in the form of increased dodge mobility! Pistols have struggled to find their niche amongst the other close range weapons, and we feel this change will give them a flavor that no other weapon has. They will become a very effective platform for chasing down fleeing enemies or for staying at the edges of a fight until the time is right. Codiffusion Constant is receiving a small damage reduction to compensate for the new mobility, but no change will be needed for Mutiny’s Song due to its limited ammo.

All pistols now reduce dodge cooldown by 0.4s upon damaging an enemy.

Orthoptic Generator and Luma Arrival are both receiving the range buffs they were meant to receive in the last patch. Hopefully they stick around this time! Avalanche is really struggling lately, so it’s seeing some changes to its ammo system to make it worthy of the name “Avalanche.”

Writhe is getting a small redesign of its infusion perk to make it easier to build up to a reasonable level and maintain for a long period of time. It’s also receiving a small damage boost to round it out. Writhe has been struggling to keep up with other weapons, and hopefully this change will finally make it worthy again. Aleph Null has been overall performing well aside from a few specific combos, so it’s only receiving a slight reduction in its infusion power and a reduction in its raw DPS. This allows Writhe to shine in the damage role and keep Aleph Null’s powerful ability enhancing bonuses as the focus.

Some small, but necessary, tweaks for Primal Eye, as it’s almost in a good spot. These changes are directly targeting its primal energy generation and to serve as a small nerf to the run-and-gun playstyle this weapon has adopted.

The combination of Volatile Mines and Horn of Supremacy has proven to be quite the strong combo because of the way the mines empower the horn. To keep the identity of Volatile Mines as a powerful setup option, the changes here should specifically make it less potent when combined with Horn of Supremacy. Frost Bomb is also outperforming by quite a bit, so the change here maintains roughly the same DPS potential, but makes it more punishing to players who miss.

Ring of the Veil